How to Fold Cloth Diapers

When I was learning how to fold cloth diapers, the trifold technique is the first fold I learned, and it's still the one that works best from my son and me.

It provides an extra bit of coverage in the front and it's a secure fold, so you could easily fold several diapers ahead of time and have them ready to go at diaper changing time.

Diaper fasteners like Snappis or diaper pins can't easily be used with this fold, so you'll need to use a wrap style diaper cover secured snugly to your baby to keep the prefold in place if you use the trifold technique.

How to Fold Cloth Diapers - Trifold

1. Lay the diaper out flat.

2. Fold about 1/4 of the bottom edge of the diaper upwards. You can adjust this fold to fit your baby. With practice, you'll know exactly how much to fold up to suit your baby's build.

4. Fold the other long edge the same way, along the seam sewn up the prefold, and tuck the bottom of the edge into the pocket formed by the first two folds (see photo below for clarification).

OPTIONAL: If you'd like to have a few diapers folded ahead of time, you can fold several diapers up to this step so you won't have to do any folding at diaper changing time. The fold is very secure, so the prefolds won't become unfolded easily.

6. Add a diaper liner or diaper doubler if you use them. 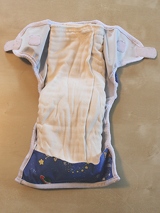 Have your say about what you just read! Leave me a comment in the box below.
Return from How to Fold Cloth Diapers to Cloth Diapering 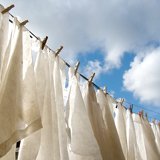 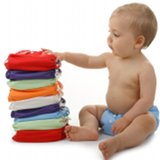