When you start using baby cloth diapers, there are a few supplies you'll probably want to pick up beyond the soakers and diaper covers.

This list will help you decide what you need and what you can do without.

Cloth Diaper Doublers
A diaper double is a small, thin absorbent pad that you can add to your baby cloth diaper to give it a little extra absorbency boost. Doublers are typically made from cotton, hemp, bamboo or terry, and they may have an extra layer designed to wick wetness away from your baby.

I have a few doublers that I have never really used because my son just isn't a huge wetter, even overnight. However, for anyone who has a heavy wetter, doublers are extremely useful for preventing leaks, particularly at bed time and nap time.

Snappi
A Snappi is a diaper fastener that is a good alternative to using pins (no pointy, sharp ends to deal with). It can be used to hold prefold, flatfold and some contour (if they're big enough) diapers in place. Snappis are simple to use, fairly inexpensive and can help prevent leaks, particularly if you find your baby's diaper tend to shift a lot.

Cloth Diaper Liners
Diaper liners are made from a thin layer of fabric (if they are reusable) or paper (if they are flushable or disposable diaper liners). Diaper liners catch some of the solids so your baby cloth diapers do not become too soiled.

They are not for everyone. Some people like having the soft diaper fabric against their baby's skin. I, however, love and would not be without a roll of flushable diaper liners. They make diaper changing and washing so much easier. Most solids are just tossed right into the toilet with the flushable liner - no soaking or scraping necessary.

Wet Bags
Wet bags are used to carry wet diapers when you are out and about and need to change diapers on the go. Simply toss the wet diaper into the wet bag, and the waterproof fabric will keep moisture and odors inside the bag. Most parents choose a small or medium sized wet bag for day to day trip and some use a large wet bag to line their diaper pail.

Cloth Diaper Pail
A cloth diaper pail is a must for storing wet and soiled diapers between washings. If you use the wet pail storage method, your diaper pail must have a locking lid. Even if you use the dry pail method, a sturdy lid can be helpful for keeping any odors inside.

If you are using a diaper service, you'll need a bigger pail (and definitely one with a good lid and a carbon filter) because your diapers will only be washed once a week, so you'll have to store more soiled diapers for longer.

Diaper Pail Liner
Using a diaper pail liner will keep you diaper pail clean, so you don't have to be constantly scrubbing it, and it will make it easier to transport your wet and soiled diapers from the nursery to the laundry room. Read the manufacturer's instructions, but normally you can throw your diaper pail liner right in the wash with your diapers, so ideally, you should have two diaper pail liners on hand - one for the wash, and one to be used while the other is in the wash.

Have your say about what you just read! Leave me a comment in the box below.
Return from Baby Cloth Diapers to Cloth Diapers Online 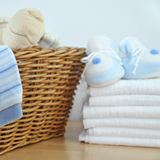 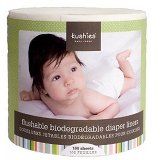 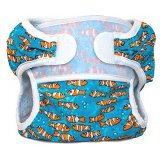