Terry diapers are absorbent and durable. Several popular brands use terry cloth for the inner, absorbent layer of their diapers, as well as for soakers, pocket diaper inserts and wipes.

Terry cloth is a looped pile fabric (think of your bathroom towels). It is a popular cloth diaper fabric because the looping creates more surface area on the fabric, which makes terry diapers very absorbent. Terry is also soft and durable. Terry cloth is more absorbent when it is looped on both sides of the fabric. One downside to watch out for is that diapers made from this fabric can be bulky and can take longer to dry when compared with other popular diaper fabrics.

Terry diapers can be made from a few specific types of fabric including:

Burley Knit Terry - Burley knit terry is a thick type of terry cloth with extra long loops on the front. The extra length of the loops make it extra absorbent and extra soft, which make this fabric an excellent choice for cloth diapers and doublers. The long loops in burley knit terry makes it good for catching the kind of loose bowel movements that exclusively breast fed babies have.

Sherpa Knit Terry - Sherpa fleece fabric is normally made from a heavy weight terry in a cotton polyester blend. One side of the terry is brushed to create a fleece-like feeling which is extremely soft and still maintains the absorbency of the terry cloth. Sherpa fleece is a very popular fabric choice for cloth diapers.

Microfiber Terry - Microfiber terry is a synthetic material which is extremely absorbent. It should not be placed directly against your baby's skin, so microfiber is normally combined with another outer layer of fabric and/or used as inserts in pocket diapers. The exceptional absorbency of this fabric make it a great choice for night time diapers or heavy wetters.

Stretch Knit Terry - As the name suggests, stretch knit terry does stretch. It is thinner and less absorbent than burley knit terry and also thinner than towel terry. To give yourself an idea of what stretch knit terry is like, think of a hooded infant bath towel (the small thinner ones for babies, not the bigger, thick ones for young children); these towels are often made from stretch knit terry.

Have your say about what you just read! Leave me a comment in the box below.
Return from Terry Diapers to Cloth Baby Diapers 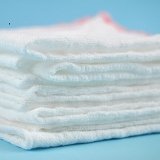 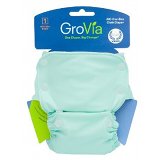 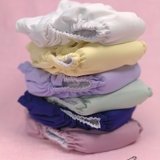